My Three Favorite Meals for Chuseok 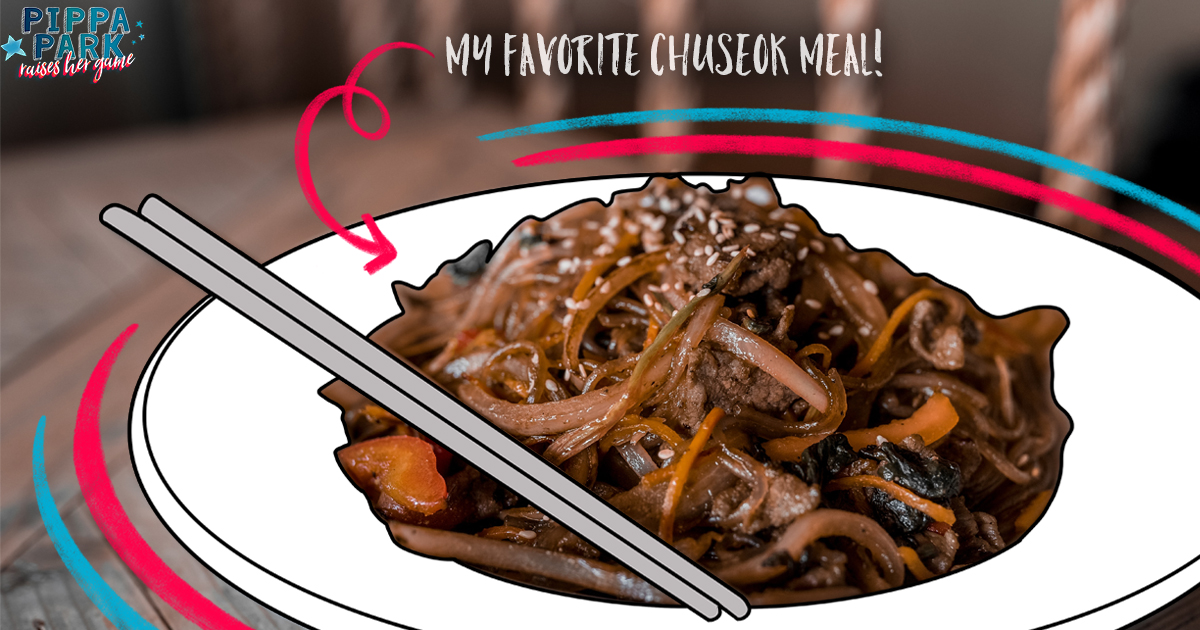 Crispy jeon, delicious japchae, and sweet Asian pears are just the tip of the iceberg of mouth-watering foods served on one of Korea’s most important holidays, Chuseok. Often referred to as “Korean Thanksgiving,” Chuseok originated as a way to both honor a family’s ancestors and celebrate the harvest, and it occurs on the fifteenth day of the eighth month on the lunar calendar(1). While there are many formal components to Chuseok that center around honoring your ancestors, when I think of Chuseok, I primarily think of all the delicious food. Growing up, my memories of Chuseok included things like spending time with family (most of my mom’s family still lives in South Korea, but one of her brothers moved to Texas with his family) and playing games with my cousins in between stealing bits of kimchi pancake from the kitchen. My mom would cook galbi, japchae, and all sorts of side dishes, filling the whole house with savory, mouthwatering scents.

In my book, Pippa Park Raises Her Game, Pippa’s Chuseok also revolves around amazing food and spending time with family. When I was growing up, my mom did most of the cooking, but now that I live away from home, I spend most Chuseoks with my sister, and we cook for ourselves. So, in honor of the holiday, I’ll give y’all the rundown on some of the foods both Pippa and I eat on Chuseok.

"Mina frowned, obviously debating whether to let me off the hook so easily. A beat passed, and she relented. ‘Jung-Hwa forgot to get shrimp for the saeujeon. I need you to go to David’s Divinities to pick up half a pound.’”

Jeon is a kind of Korean “pancake” and can be customized in a variety of different ways. As a kid, I loved when my mom made kimchi or seafood pancakes, but this year, I made saeujeon (shrimp) and hobak-jeon (zucchini). It was my first time making both dishes, and while the hobak-jeon was both delicious and easy to make (essentially you just batter zucchini slices and then dip them into egg before panfrying), I overcooked the shrimp. But I wasn’t too disappointed—it gave me an excuse to try them again in the near future!

“‘This is delicious,’ Mrs. Lee said as she picked out a bit of sweet potato from her japchae and popped it into her mouth. ‘It reminds me of home.’”

When I was growing up, japchae was one of my sister’s favorite foods. It’s glass noodles stir-fried and mixed with soy sauce and a whole array of tasty additions, including sliced carrots, boiled, seasoned spinach, and beef. Since I was focusing on other dishes this year, I bought my japchae pre-made at my local H-Mart, but in retrospect, I think this is one worth making fresh. As a kid, I liked to be mischievous and steal bits of my favorite ingredients from the japchae before we sat down to eat—small pieces of the meat were a popular pick for me, but so was the spinach. My mom would blanch it and add sesame oil and salt to the greens before adding it to the japchae—honestly, though, I would have eaten a whole bowl of just the spinach and been happy.

“While Jung-Hwa grilled pork belly, Mina stuffed rice cakes with a blend of ground-up, sweetened sesame seeds and set them aside to be steamed over a bed of fragrant pine needles.”

When I was younger, my mom sent me to a class where I studied Korean with other children from the Korean church she attended (who were all about five years younger than me, but that’s another post). There, I learned how to make songpyeon—these delicious delectables are an iconic food served during Chuseok. They’re rice cakes that are stuffed with a sweet filling, such as sweetened sesame seeds, and then, if prepared the traditional way, steamed on a bed of pine needles. The rice cakes are often beautifully colored, and the sesame seeds are a perfectly sweet, nutty complement to the chewy rice cakes.

While there are countless other dishes that might pop up on Chuseok, these were a few dishes that both me and Pippa enjoyed during our last one. I was happy with how the majority of the food turned out, but in reality, everything could have been burnt or ice-cold, and I would still have had a happy Chuseok—because honestly, as long as I make time to spend with family, I feel like I’m doing something right.