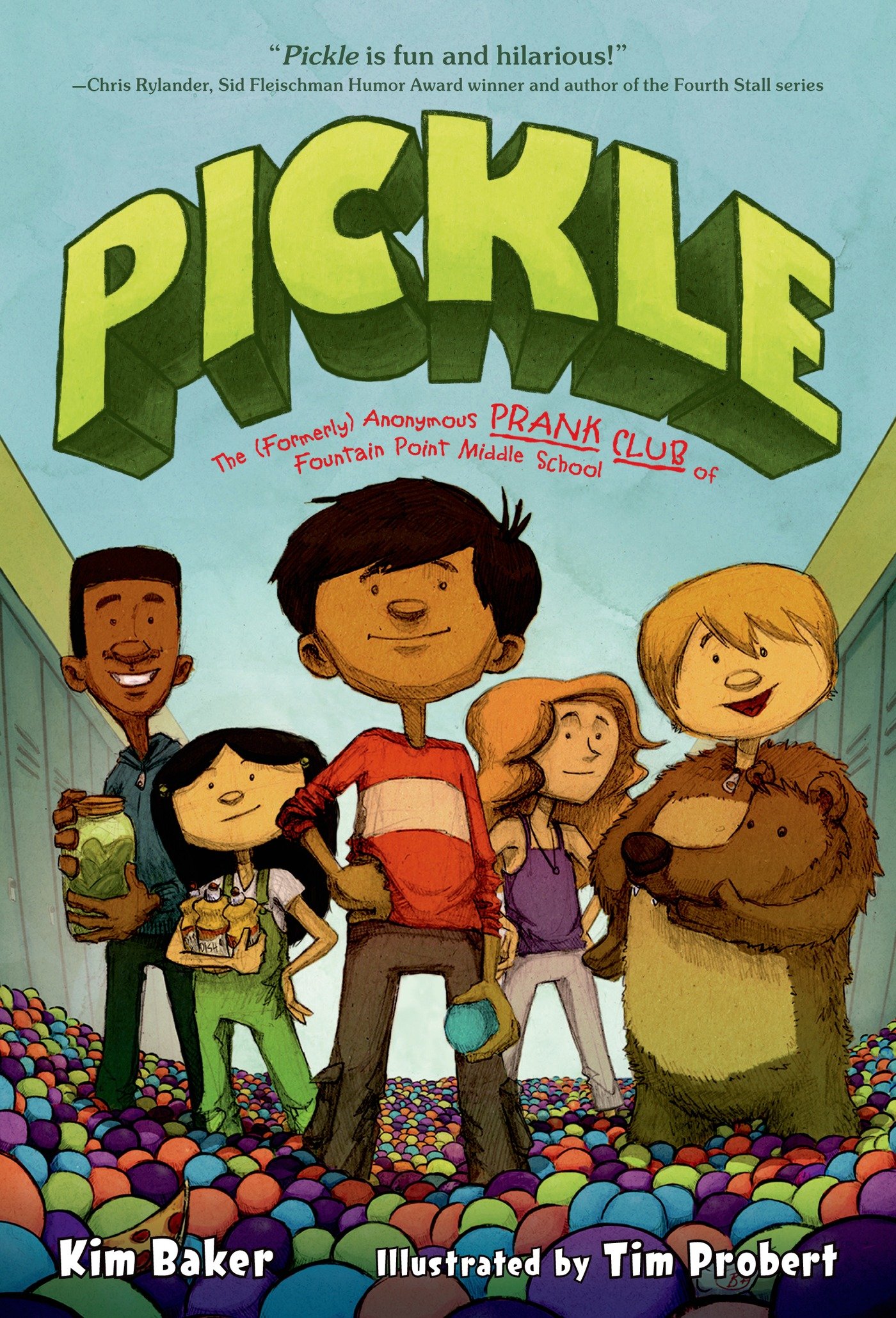 The book is told from the point of view of sixth grader Ben Diaz, who, after pulling off an outlandish prank involving a lot of ball-pit balls, decides to form a secret prank club at his school. He recruits some of the most worthy pranksters around, including Frank, who’s a computer whiz; Oliver, who’s good at spinning stories; Bean, who wasn’t technically invited but who has parents with a costume shop (excellent for pranks); and, eventually, the new girl at school, Sienna. Under the guise of a pickle-making club, the kids pull off increasingly outlandish exploits. But with the principal cracking down on the anonymous pranksters, it’s only a matter of time before someone finds out the truth . . .

This book was so fun! That’s honestly the first thing that springs to my mind when trying to describe Pickle. The plot of the book stays close to the premise—the focus is on the pranks the kids pull (everything from dressing up in animal costumes to scare people at the zoo to putting dry ice in the locker rooms), which are definitely more creative than anything I would have been able to come up with.

While readers might crack open the book for the prank-loving fun, the interactions between the members of the P.T.A. (Prank and Trickster Association) will keep them flipping the pages. The members all have distinctly unique personalities, and I liked watching Ben slowly open up to the group, as the dynamic tipped from being in a formal prank club to being actual friends. It was also nice that there were multiple POC in the club! As the book goes on and Ben becomes closer to his new friends, he begins to drift away from his best friend, Hector. Although Hector feels excluded, Ben refuses to tell him the real reason he is hanging out with the new group, as Hector is related to the school’s strict principal and has been known to tattle in the past. Baker handles this dynamic well, in a way that had me rooting for both characters in the end. And while it’ll only take you a couple hours to reach the end, this fast-paced, delightful read will linger in your mind for far longer.

Also, side note, but one thing that made me do a little delighted dance about Pickle is that, in the book, it mentions that they host their secret pranking website on www.picklesforever.com. If you follow the directions, you can actually access the secret site! I’m smiling all over again just thinking about it.