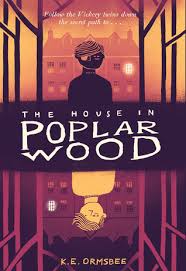 In this atmospheric middle-grade read by K.E. Ormsbee, Felix and Lee Vickery might be twins, but they live two completely different lives. In one section of their house, Felix helps his father serve Death—curing patients who still have life left in them and allowing Death to take them if they don’t. In the other section of the house, Lee helps his mother serve Memory, bottling up the memories of those who wish to part with them. The Agreement, forged long ago by Death and Memory, prevents Felix from seeing his mom and Lee from seeing his Dad. While Lee longs to find a way to break the Agreement, Felix feels less optimistic about the chances of doing such a thing—especially since their last attempt to thwart Death and Memory went terribly wrong. But then Gretchen Whipple, the mayor’s daughter, comes barging into the twins’ lives, demanding their help to solve the murder of Essie Hastings, the apprentice of Passion. In exchange for their help, Gretchen promises the boys that she’ll help them break the Agreement. If the kids succeed, then the Vickery family can be allowed to be a true family, finally. However, the twins know better than anyone the kinds of punishment Death and Memory can dole out to those who cross them. Last time was a warning. If they are caught this time? The consequences could be as deadly as Death himself . . .

I don’t know why, but I enjoy books with Death as a living entity. But a book where Death, Memory, and Passion are all separate entities with their own histories and grudges, manipulating and working alongside humans? Adore. I thought the premise of this book had strong potential, and I wasn’t disappointed! There was intrigue throughout almost every chapter, and I finished the book in a solid sitting—something that happens more rarely nowadays since I actually do a few things with my time. (And yes, binge-watching Buffy the Vampire Slayer counts—come at me!)

The book is told from the rotating perspectives of Lee, Felix, and Gretchen, and although I enjoyed Lee’s and Felix’s chapters, I felt most pulled toward Gretchen’s voice. As I mentioned in the summary, Gretchen is the daughter of the town’s mayor. However, what I didn’t mention is that each mayor is also a summoner—a human who has the power to call on entities like Death and Memory. Gretchen’s older brother, Asa, is allowed to know all the summoner secrets, but Gretchen, as the second born, is largely disregarded by her family. However, when she suspects her father of helping hide what really happened the night Essie Hastings was murdered, she becomes determined to undercover the secrets lurking in her own home—no matter the consequences.

Despite being treated poorly by the majority of her family, Gretchen isn’t a passive voice. Instead, she is fiery, blunt, insatiably curious, and obstinate to the point of fault. She is full of life and passion—an excellent complement to the twins. I also felt so invested in her storyline that I think it could have made an excellent book told solely from her point of view. Despite the twin bond of Lee and Felix, the most interesting relationship to me was between Gretchen and her (sometimes cruel) brother Asa, who is definitely hiding secrets. Asa initially comes across as rude and condescending, but despite the author never dipping into his thoughts, Asa is one of the characters who changes the most throughout the book, and by the end, he had totally endeared himself to me.

Speaking of the end—Ormsbee did a solid job wrapping up the book. While the ending wasn’t a huge shock, it made sense, although I do wish that there was some sort of confrontation with Gretchen’s father. But other than that, I thought it tied up a bunch of loose ends in a way that left me thoroughly satisfied. And only a little bit spooked.