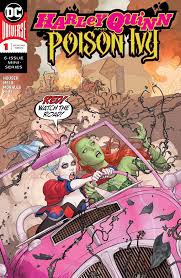 I’ve never reviewed a comic before, but the other day, I started to wonder why, exactly, this was true. While I’m not the most well-versed person in the comic world, I do love them, and read my fair share of comics/graphic novels (favorites include The Wicked + The Divine, Spell on Wheels, and basically anything with Harley Quinn in it). Speaking of Harley Quinn...I just finished the first comic in a new series from DC centered around the absolutely iconic duo of Harley Quinn and Poison Ivy, written by Jody Houser, and with art by Adriana Melo, and thought to myself...well, if I’m going to review a comic, why not this one?

The first comic in a 6-issue mini-series, Harley Quinn and Poison Ivy takes place after Poison Ivy (Pamela Isley) dies in Heroes in Crisis and is reborn from a flower she gave to Harley. In the first issue, we see Poison Ivy’s problems continue (there’s a leafy mishap in a dressing room) until Harley decides the best way to help Poison Ivy is by giving her a mysterious box of fertilizer...sent by none other than Lex Luthor. As Poison Ivy ingests the fertilizer, Harley Quinn has a heart-to-heart with herself and decides that the two should be heroes: after all, she says, “if the world’s already broken, what’s the fun in trying to break it even more?” But before Poison Ivy can reply, an old villain breaks onto the pages, setting up some delicious intrigue for the coming comics.

Whenever I enter a comic store, I feel like I always walk away with at least one Harley Quinn comic. I first became interested in the zany, mischievous, sometimes bad, sometimes good, but always loveable character in relation to the Joker. Harley is in a toxic, abusive relationship with him, and while the two clown-themed criminals make for some great, thrilling plotlines together, it’s definitely not a relationship that gives me any fuzzy feelings. Harley and Pamela, on the other hand? A different story. Now, I know that Pamela isn’t always great to Harley, either (especially in earlier interactions between the two) but the bond between them is handled so well in many comics and even films (I’m thinking of the ending in Batman and Harley Quinn) that I can’t help but ship them. In Harley Quinn and Poison Ivy, the two share several sweet moments. While Harley’s personality is fun-loving and child-like, here we see a more nurturing side of her, as she does her part in helping Pamela back to full health. Although Harley has misgivings about giving Pamela the box of fertilizer from Lex Luthor (as she probably should), she does it anyways, because “if it helps my girl, it’s a good thing, right?”

But while I love the relationship between the characters, I can’t quite judge the plot of the series yet, as there’s still so much to come. The writing, done by Jody Houser, manages to capture the playfulness of Harley’s voice, even as she struggles to help Pamela, but some bits in the flow of the comic confused me. Immediately after Harley gives Pamela the box, she has an internal monologue where she becomes bitter about her status as a bad guy, telling herself that she’s lost her edge. While this monologue fuels Harley’s important decision to become a hero later in the comic, the musing itself seems a little disconnected from the rest of the plot to me – I wasn’t sure why Lex Luthor’s sketchy gift prompted it. In general, actually, the plot falls second place to the characters in this comic, which I don’t think is a particular bad thing, especially as the description of the series from DC’s website is centered around Harley Quinn and Poison Ivy exploring their relationship – something I can’t wait to see more of, especially since there were so many details about this new series that I do like, such as the art, which is done by Adriana Melo, and is full of bright, beautiful colors that burst off the page, making the mood perfectly match the vivacious personalities of the two main characters.

The cover shows the two villain/heroines swerving an ominous landscape in a bright pink car, and so while I can’t speak for the quality of the whole series yet, I will say this – I’m excited to be along for the ride!