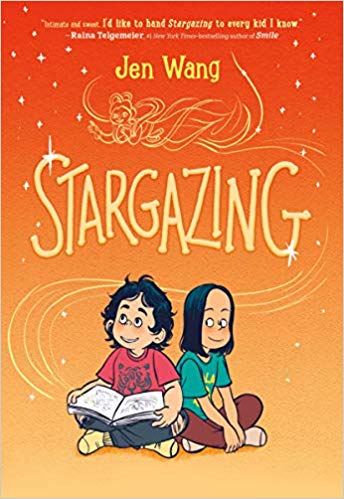 We’re now in the thick of winter, and just as I bury myself in blankets and sip steaming hot tea to stave off the cold, sometimes I need books to help melt my icy insides as well. While Stargazing, a graphic novel by Jen Wang, delves into issues such as feeling different within your own community and parental expectations, it’s told with such sweetness that this relatable and intimate story about friendship warmed my heart.

Meet Moon Lin. Although both she and Christine live in the same Chinese American community, Moon is everything that Christine is not—artistic, confident, and brash. Yet when Moon moves in next door to Christine, the two girls become fast friends. In between practicing K-pop dance routines for the school’s talent show and painting their nails, Moon opens up to Christine about the visions she has—the ones that reassure Moon that her real home is high up in the cosmos.

The reason I think this book had me smiling so much is that, despite other conflicts, the friendship between Christine and Moon is at the heart of Stargazing. It was super satisfying to watch the two girls bond over things as fun and irresistible as K-pop as well as deep, solemn conversations about life and death, and it reminded me of how easy yet monumental it felt making a new best friend at that age. I also enjoyed how Wang focused on the way that people who live in similar communities can have completely different upbringings—Christine attends Chinese class and has stricter parents, while Moon only speaks English, is a Buddhist, gets into fights, and is allowed to do things (like paint her nails) that Christine isn’t supposed to do.

But now that we’re on the subject of Moon, can we just talk about how much of a superstar character she is? And no—not just because of her fabulous K-pop dance moves. Moon is funny, charming, and disarmingly open. She’s a sweet, artistic dreamer who is complicated by her quick temper and willingness to brawl, and she is the kind of character you could listen to for days.

Last year, I started making a conscious choice to read more graphic novels, and it’s opened me up to an entire new world of amazing literature. It’s supremely cool to see how the art and text interweave and inform each other in a graphic novel, and I was even more impressed to find out that the illustrations in Stargazing were also done by Jen Wang (with coloring by Lark Pien). By keeping the backgrounds simple and uncluttered, Wang puts the focus on her characters and their expressions in a way that helps draw you into Moon’s and Christine’s life from the opening pages. Plus, the warm, mellow color palette only adds to the cozy feelings this book gave me.

Of course, while the ending of the book had me wishing I could read even more of Moon, I told myself not to be too sad. After all, the year might be over, but my desire to read as many graphic novels as I can fit on my To Be Read list is just starting—and lucky for me, Jen Wang’s earlier release, The Prince and the Dressmaker, is already waiting on my shelf.

Disclosure: I am an affiliate of Bookshop.org and I will earn a commission if you click through and make a purchase