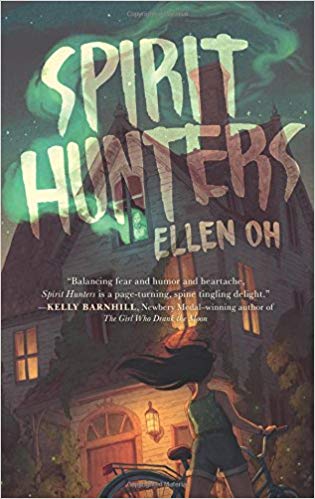 I adore haunted houses. Actually, let me rephrase. While I would never want to go inside a haunted house, I find them fascinating and enjoy researching and watching videos about them from the safety of my own bed. So when I picked up Ellen Oh’s Spirit Hunters while browsing Powell’s Books and saw that it features both a haunted house and a Korean protagonist, I nearly did a little happy dance right there in the store. Korean shamanism plays a role in this book too—something I haven’t seen explored in other horror novels. I wanted this book so badly. Have no fear (ha)—it didn’t disappoint.

When twelve-year-old Harper Raine moves to a new home in DC, she can tell something is off about the place. Perhaps it’s the strange cold spots or the way the hairs on her neck keep standing on end. Still, when her new friend, Dayo, warns Harper that the home is rumored to be haunted, Harper is skeptical . . . until her younger brother, Michael, starts to act weirdly. He becomes distant. Violent. Almost as if he’s been possessed. For some reason, the whole situation gives Harper an unbearable sensation of déjà vu. The key to saving Michael might be locked somewhere in her own mind—but can Harper unlock the secrets in time?

Spirit Hunters starts out like a standard haunted house story; we meet Michael’s “imaginary” friend Billy within the first three pages, and it soon becomes apparent that Billy is a) definitely not imaginary and b) trying to possess Harper’s brother. Two main story lines interweave throughout the novel—one involving the possession of Harper’s younger brother and the other involving the mystery of Harper’s missing memories. The bond that Oh establishes between Harper and Michael give the novel an emotional weight that keeps the reader invested. Plus, the way Oh describes scary scenes in gruesome detail (toy trucks slicing arms, bones fracturing) will simultaneously frighten and exhilarate middle graders.

While Michael’s gradual possession by a violent ghost child gave me the classic horror elements that I craved, the mystery of Harper herself—or, rather, the mystery of what happened to Harper that caused her to lose her memory and left her with several fractured bones—took this book to another level. The story is primarily told in third person, but we get first person diary entries from Harper so that the reader can piece together the puzzle alongside Harper herself. Readers will likely be a couple steps ahead of Harper, creating great tension, and the answer is both satisfying and likely to have you scrambling for book number two.